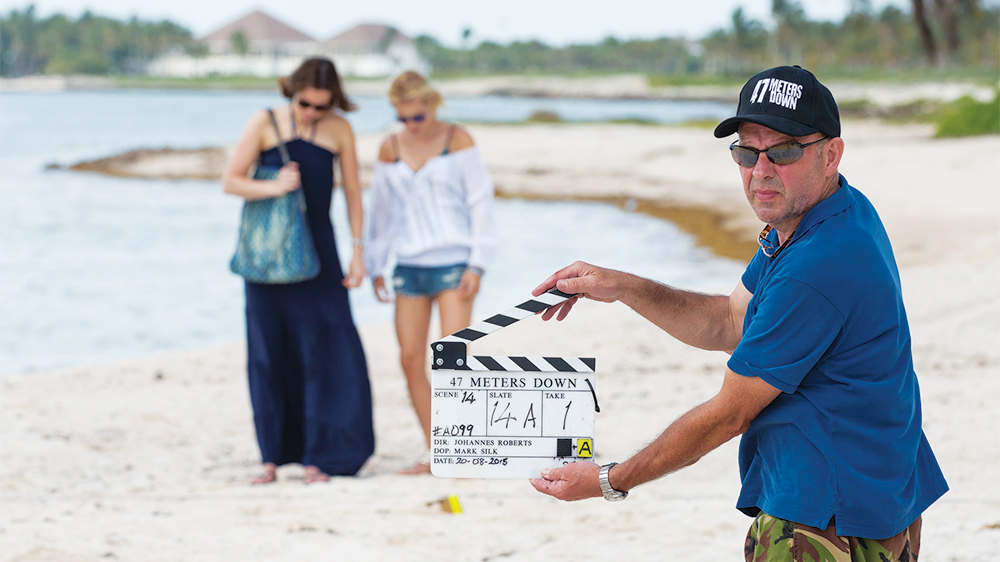 Posted at 17:25h in News by esmpadmin

“I studied all of the release patterns, genres and movies, and noticed that a shark movie opening in the summer never fails,” Allen says. So less than a year after his company purchased vet distributor Freestyle Releasing in 2015, he walked down the beach to his Malibu neighbor Bob Weinstein, having heard that Dimension’s “47 Meters Down” was having trouble getting released, and went in for the kill.

“I said, ‘If I [offer] 3 million bucks, are we done?’ Next thing I know, he calls and says, ‘You know that movie you bought from me on the beach? There are 10,000 DVD units on trucks heading to video stores all across America.’ ”

Allen wired the payment, stopped the deliveries in the nick of time, sat on it for a year, and ended up with one of the top-grossing indies of 2017: “47 Meters Down” debuted in June 2017 and took in $44.3 million, with Allen splitting its $30 million P&A spend with a partner for a healthy profit.

It was an auspicious start for Allen and ESMP president Mark Borde, who sold Freestyle to Allen and stayed aboard for three years before departing in November. Another Freestyle vet, ESMP head of acquisitions Chris Charalambous, remains with a staff of 20 based in Century City.
The theatrical waters have proved choppier for ESMP’s subsequent releases, however. “Hostiles” and “Chappaquiddick,” pricier movies picked up after that shark movie, earned $29.8 million and $17.4 million, respectively, at the domestic box office, while “Friend Request” and “The Hurricane Heist” both came in considerably lower, fizzling with audiences and critics.

And ESMP’s latest release, “Replicas,” brought in $2.5 million domestically at 2,329 theaters its opening weekend, a notably poor debut for star Keanu Reeves in a wide release.

But Allen is unfazed by the challenging theatrical climate for independents. He believes moderately budgeted films can make $30 million to $60 million at the domestic box office when they are supported by meaningful marketing campaigns. After decades in Hollywood, he has healthy regard for the risks involved — and an appreciation of the monies involved, from upfront marketing costs to revenue from the home market.

“What you need to understand is that Hollywood is a casino, and you will probably lose all of your [P&A] money,” Allen says. “You’ve got to look at that $15 million like you’re putting in on the crap tables and you’re never gonna see it again. People may not show up for this film.”

In the case of “Hostiles,” a $50 million Western starring Christian Bale, Allen put in $30 million in P&A plus a substantial minimum guarantee for U.S. rights. The film went on to gross $29.8 million at the domestic box office, and that was just for starters. “A little secret people don’t ever talk about is those movies that do $15- to $40-, maybe $50 million at the box office tend to over-index on home media, because they’ve got plenty of branding and people didn’t get around to seeing them,” Allen says. “ ‘Hostiles’ was one of those movies that did very well on home media.”

And “Chappaquiddick,” ESMP’s Ted Kennedy bio-pickup “was terrific,” he says. “We spent a little over $16 million — not a lot of money — to tell people to go see it. I was able to cut millions from the ad budget because CNN and Fox News were going crazy talking about the movie.”

Allen plans to mitigate risk by bringing in producing partners and forging new alliances, including the sales and distribution arm Entertainment Studios Motion Pictures Intl. he launched in partnership with FilmNation. “Our goal is to rival the biggest movie studios out there,” he says, with 18 to 24 annual releases on 2,500 to 4,000 screens each.

The company is looking for “very commercial, very broad family movies” that are G, PG or PG-13, “and we really want a strong plate of comedies.” He’s also in the market for more prestige fare a la “Hostiles.” Upcoming releases include animated “Arctic Bugs,” the “47 Meters Down” sequel subtitled “Uncaged,” and “Boss Level,” a sci-fi thriller starring Frank Grillo, Naomi Watts and Mel Gibson.

“People are going to be very surprised at how aggressive we will be in 2019 and beyond, because we’ve spent the last three years lining up acquisition, production, financing and P&A partners,” says Allen, who plans to announce more hires in the next six months.

“We have ‘de-risked’ it in a significant way, which allows us to make a greater investment and bring more movies to the marketplace.”

Another revenue generator: though focused on acquisitions, ESMP has kept the Freestyle Releasing label for its service deals, whereby producers retain rights and pay a distribution fee.

And the parent company also recently secured $500 million in credit facilities to use across the feature film division and Allen’s bread and butter: his television shows and 24-hour HD television networks that also offer future windows for his films.

“When we believe in something enough, we just do it ourselves,” he says. “That wasn’t my intent. I just found it was cheaper to put in the money myself than talk to 50 flakes.”

“Our goal is to have 10% of the global box office in the next three years,” Allen says.

Given Allen’s success in other areas of showbiz, his plan to produce his own slate of eight features with budgets as high as $100 million doesn’t seem so farfetched. But how he’ll succeed where many others have failed in Hollywood’s shark-infested waters remains to be seen.