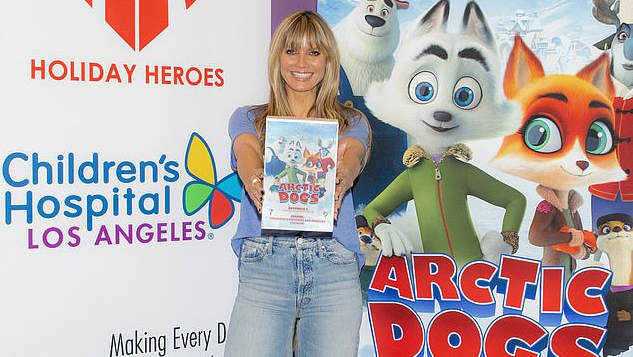 Posted at 19:51h in News by esmpadmin

By Adam S. Levy for DailyMail.com

Heidi Klum was a vision of beauty as she headed to Children’s Hospital Los Angeles Tuesday to screen her new film Arctic Dogs.

The America’s Got Talent personality has visited the facility multiple times in the past to greet patients and staff.

Heidi voices the role of Jade/Bertha in the animated adventure comedy, which features an ensemble cast of performers providing the voices of the characters.

Others to lend their talents to the film include Anjelica Huston, Alec Baldwin, James Franco, Jeremy Renner and Michael Madsen.

Klum, who also appears on Amazon Prime’s Making the Cut, has past lent her voice to projects such as 2011’s Hoodwinked Too! Hood vs. Evil and the 2003 video game James Bond 007: Everything or Nothing.

The outing came amid one of the model’s favorite times of the year, as she annually dons extravagant costumes at Halloween parties she hosts, with past ensembles including Princess Fiona in 2018, a butterfly in 2014, and Betty Boop in 2002.

According to Page Six, her 2019 bash will take place at the Moxy East Village hotel’s Cathédrale in New York City.

It’s been a big year for the German supermodel, who tied the knot with Tokio Hotel guitarist Tom Kaulitz, 30, in Italy this past July. The stunning star was previously married to singer Seal from 2005 until their 2012 separation, and stylist Ric Pipino from 1997 to 2002.